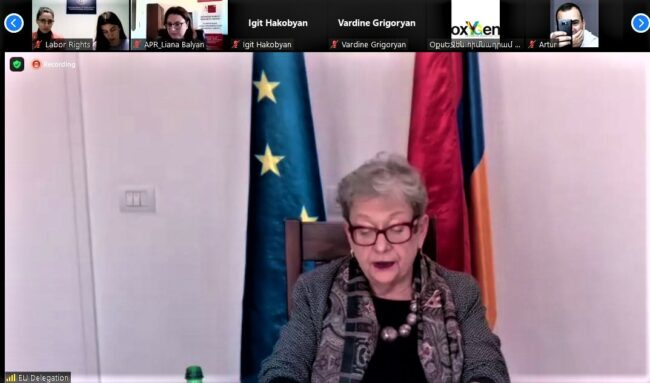 “In its permanent dialogue with the authorities and civil society, the EU stands by Armenia to improve and respect the labour rights. Labour law should not be seen as an obstacle to entrepreneurial freedom, but rather as a tool to facilitate social dialogue,” H.E. Ms. Andrea Wiktorin Ambassador, Head of the EU Delegation to Armenia said in her welcome speech. The event was attended by Ruben Sargsyan, Deputy Minister of Labour and Social Affairs of Armenia, and Hakob Avagyan, Head of Health and Labor Inspection Body of Armenia who also welcomed the participants.

The studies revealed a number of problems related to the labour rights situation in Armenia. In particular, as a common conclusion, three of the studies – the “Research on the Situation of Labour Rights Protection in Armenia” (the full Report) the “Comprehensive Needs Assessment Research” and the “Evidence Collection on the Real Cases of Labour Rights Violations and Court Cases” indicated the problem of lack of awareness of the employees on their labour rights. All three researches include recommendations to act towards raising public awareness regarding benefits and entitlements upon separation, safeguards against arbitrary dismissal as well as available remedies in place, especially in marzes, for those employed in private business as well as among women to empower them to stand for their rights.

Other finding of the studies indicate that:

The results of the “Impact of the Covid 19 Pandemic on the Labour Rights Situation in Armenia” and “Best Practices of Establishment of Trade Unions in the EU” studies were also presented during the event.

The CSOs forming the three consortia implementing the projects aimed to improve labour rights situation in Armenia came up with a decision to continue coordinated efforts in the sphere.

The full recording of the event is available HERE. All the studies will be published and shared with the stakeholders after finalization.