We, the undersigned journalistic organisations, hereby express our deep concern about and disappointment with the unacceptable situation and processes taking place at the National Assembly in the recent two days, including the facts of unlawful obstructions or discontinuance of the activities of journalists and cameramen covering them.

On 24 August, when heated polemic between the members of the NA developed into a brawl, the security officers forcibly removed the representatives of the media from the box foreseen for the press, thereby preventing them from continuing filming the incidents. The work of journalists and cameramen was obstructed also at the entrance to the plenary session hall. The said obstacles included threats by security officers directed at Hayk Tonoyan, cameraman of the online website www.news.am of depriving him of his NA accreditation if he continued shooting the incident, then the footages were allegedly deleted.

The same situation was repeated on 25 August. To prevent the parliamentary brawls from being filmed, the media representatives were again removed from the box, including by using violence. Their professional activities were again obstructed at the entrance to the plenary session hall.

We insist that these acts in respect of the journalists and cameramen accredited with the National Assembly violate the law and are directed against freedom of speech and the right of the public to receive information.  They are also contrary to the substance and essence of the discussions held during the 23 August meeting between the leaders of the three journalistic organisations – Committee to Protect Freedom of Exspression, Center for Media Initiatives and Journalists’ Club Asparez – and the NA Speaker Alen Simonyan.

It goes without saying that all RA citizens have a right to be informed of the manner of work and conduct of each and every MP. Moreover, any information in respect of the parliament, which does not contain state or other secrets, must become public property. This can happen first and foremost through uninhibited journalistic work.

In the light of the aforesaid, we demand that: 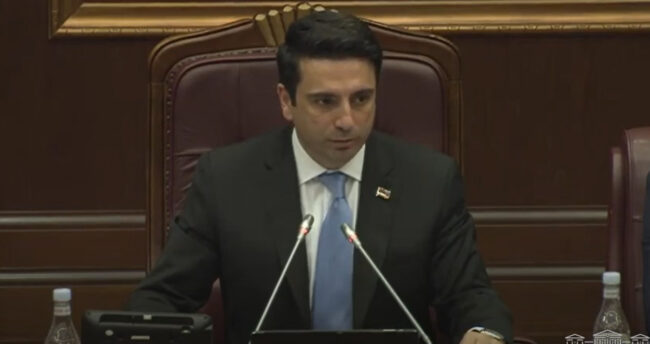 On 11 August, following a heated exchange between the MPs from the ruling faction and the opposition, Alen Simonyan, Speaker of the National Assembly ordered to discontinue live broadcast. In addition to this, the security officers prohibited the journalists and cameramen accredited with the parliament to shoot the incident from the box allocated to them.

We, the undersigned journalistic organisations note that the Speaker of the National Assembly clearly exceeded his powers: the RA Constitutional Law on the Rules of the National Assembly Procedures does not foresee such a power. RA citizens have a right to and must be informed of anything happening in the parliament, including the conduct of each and every single MP, regardless of whether this conduct is assessed positively or negatively.

We harshly condemn the prohibition imposed on the media representatives by the security officers whereby they were not able to shoot the conflicting situation in the plenary session hall.

Utterly shocked at yet another incident of restricting without any good reason the activities of the journalists accredited in the parliament, yet another infringement on the right to be informed of the RA citizens, we hereby reiterate the assessment as reflected in our August 5 statement, and we demand that the NA leadership:

The opening session of the National Assembly of the 8th convocation convened on 2 August was accompanied with strict restrictions to the movement of media representatives in the parliament. Journalists and cameramen were not allowed into the new parliamentary building where sessions of the standing commissions are convened, nor enter the area accommodating the rooms of he representatives of the parliamentary majority, nor even use certain lobbies where they used to take interviews and comments from MPs.

As early as the last two weeks there were rumours about imposition of such restrictions. However, concerns to this effect were appeased when in answer to the inquiry made by Taguhi Tovmasyan, MP from the ‘I have honour’ faction the secretary general-chief of the NA staff informed her that there was no decision on restricting journalists’ movement. Nevertheless, on the very next working day the media representatives had to face the opposite situation.

We, the undersigned media organisations, note that the above restrictions were imposed in the parliament without any prior discussions and informing the media in advance of the changes in their working conditions. And what is even more important: no normative legal act has been adopted as the legal basis for such actions and only on the same day, 2 August, when these restrictions became effective, the decision of the NA Speaker on this was published.

We condemn such arbitrariness and insist that these steps, rather than regulating the free activities of the media in the parliament, are aimed at creating unnecessary obstacles in obstruction of professional journalistic activity. These steps are directed at shielding parliamentarians from unwanted questions and the criticism of the press and can clearly undermine the transparency and accountability of the NA work.

We are aware and have time and again voiced our concerns about the unpleasant incidents in the NA when both MPs and journalists have transcended the boundaries of civilised relations and created meaningless conflicts. However, this problem must be resolved on the basis of legality, good reason, mutual understanding and trust in order tp enhance the effectiveness of both MPs’ and journalists’ work.

In view of the aforesaid, we demand that the leadership of the NA: